Darvin enlisted in the United States Army at the age of 20, was honorably discharged in 1960, and then continued to serve 32 years in the National Guard, obtaining the rank of Chief Master Sgt. He has spent the last two years in the Guard serving in Afghanistan. 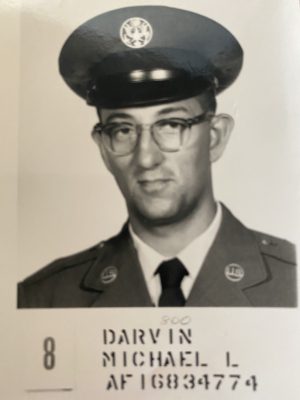 Darvin worked in the procurement field as a maintenance superintendent. Darvin taught cable splicing to join cables at Sheppard Air Force Base in Texas. “We actually spliced ​​permanent cables that were hanging from poles or buried in the ground or some were even just lying on the ground for convenience,” Darvin said. “As an instructor, pretty much everyone I have taught has been to Vietnam or Thailand.”

Darvin said he didn’t really feel the effects of civilian opinions on the Vietnam War when he finished his service in the Regular Army, but he knew of other veterans who did: “You know, some people didn’t like those in Vietnam for one reason or another. Some did not, others did. I have had mixed reviews from some people. If they returned home through a public airport wearing their uniforms, they would be greeted rather coldly, but if they returned home in “civilian” people did not really know where they had come from.

Washington, DC is no stranger to Darvin who has a sister he visits and who lives in nearby Arlington. He looks forward to seeing a number of sites, “especially the WWII monument, because when we were last there in 2004, it was under construction.”

“I’ve never seen the new Air Force memorial, either,” Darvin said, “it’s a bit of a different monument. It has three arrows that shoot skyward that simulate the take-off of three planes. reaction.

Darvin retired from the Wisconsin Telephone Company after working as a cable slicer for 30 years. Today he is seen playing golf or reading books by his favorite author, Clive Cussler. He continues to take care of the job market by preparing income tax returns for the past nine years at a large tax corporation.

Darvin and his wife, Janet, have been married for 56 years next January. They met at a ball at St. Aloysius Church in Milwaukee.

Other Washington County veterans on the Saturday November 6, 2021 flight include: